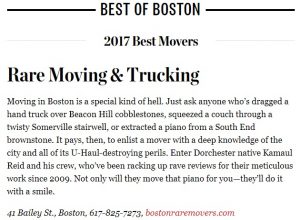 “An honor and a privilege,” says Kamaul Reid, founder of RARE Moving & Trucking Company, and Dorchester-native. With over 20 years of experience navigating furniture through Boston’s narrowest streets and apartment hallways, Kamaul specializes in Boston.

While he can’t compete with the larger, national chains, Kamaul is confident that he’s found his company’s niche, “We cater more to the city, and we’re smaller.” RARE Moving’s relatively small size allows it to be much more agile than their competitors, who often give their clients a two to three week window for delivery on interstate moves. The strategy, while cost effective, pushes the frustratingly long wait times to the clients. RARE Moving delivers in as little as 24 hours.

Reid also contracts with nonprofits that help people to move into and out of homeless shelters, as well as battered women shelters. While not as profitable as his other work, those jobs account for nearly ten percent of his business, and is a testament to how deeply he cares about his Boston neighborhoods.

RARE Moving & Storage are influencers in their community, hiring local workers as a way of investing in the community. “They recycle money back into the community,” he says. Most of the 40 employees at RARE Moving & Trucking come from Roxbury, Dorchester and Mattapan.

His loyal customers and great reviews have expanded his business to include 40 employees, 7 trucks, 2 forklifts and a 25,000-square-foot warehouse and office space in Braintree.

Customers can fill out a form on the RARE Moving & Storage Company website, with customers typically receiving a phone call with a quote within an hour.